Last week on a blazing hot day, the boy and I took a hike up Kinder Scout in the Dark Peaks. We had planned to walk up one side and come back down within 2-3 hours. Five hours later we were on the descent and dying… We could have come down earlier but were both buzzing and full of energy at the top so we continued to the waterfall.

On the way around we saw a female Stag’s Head Beetle, numerous Lepidoptera larvae, lizards, a raven, young frogs, plenty of adult butterflies and other insect species, and plenty of Swaledale sheep on the mountain.

The walk was hard going but not terrible. I hurt for a couple of days afterwards and had burnt shoulders, and a burnt neck and back, but it was well worth the walk and obtaining a few more images. 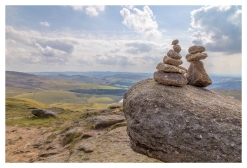